We provide comprehensive care for depression. Call us for a free consultation.

Depression symptoms are traditionally treated with psychotherapy and antidepressant medications, and these treatments are considered the first-line treatments. Specifically in the case of antidepressants, these medications are thought to increase the levels of under-performing neurotransmitters in the brain. While these changes have a positive effect for many, medications do not work for all and even when medication does work, there can still be some serious side effects to consider.

Antidepressant medications are chemicals that are typically taken by mouth. These chemicals circulate in the bloodstream throughout the body, often resulting in unwanted side effects such as weight gain, sexual problems, upset stomach, sleepiness, and dry mouth. Even after all this, it can take days or weeks for a medication to circulate through the body and reveal whether it is effective for a patient.

Recent research into Transcranial Magnetic Stimulation (TMS) has created a new alternative treatment for depression. It is believed that by focusing electromagnetic pulses at specific regions of the brain, TMS activates and raises the levels of neurotransmitters in areas shown to be under-performing in people suffering from depression. TMS is a very promising treatment for depression and seeks to be a viable therapy for those who have not benefited from prior antidepressant medications.

NeuroStar TMS Therapy is a new treatment cleared by the US Food and Drug Administration (FDA) for patients suffering from depression who have not achieved satisfactory improvement from prior antidepressant treatment. TMS stands for “transcranial magnetic stimulation.”

Non-invasive, meaning that it does not involve surgery. It does not require any anesthesia or sedation, as the patient remains awake and alert during the treatment
Non-systemic, meaning that it is not taken by mouth and does not circulate in the blood stream throughout the body.
The typical initial treatment course consists of at least 5 treatments per week over a 4-6 week period, for an average of 20-30 total treatments. Each treatment session lasts approximately 19-40 minutes, depending on what the doctor determines is the correct protocol.

TMS+YOU is an online community and national patient advocacy site for TMS Therapy. Those considering Transcranial Magnetic Stimulation can connect with patients who have had the treatment to answer questions, share insights, and get the latest information.

How Does TMS Work?

Through a magnetic coil, the NeuroStar TMS Therapy system generates highly concentrated, magnetic fields which turn on and off very rapidly. These magnetic fields are the same type and strength as those produced by a magnetic resonance imaging (MRI) machine.

These electrical currents activate cells within the brain which are thought to release neurotransmitters like serotonin, norepinephrine, and dopamine. Since depression is thought to be the result of an imbalance of these chemicals in the brain, TMS can restore that balance and, thus, relieve depression.

NeuroStar TMS stands for “Transcranial Magnetic Stimulation.” TMS is a medical procedure that works by delivering highly focused MRI-strength magnetic pulses to noninvasively (without surgery) stimulate the brain and treat major depression. This magnetic field stimulate the neurons and show depression symptom relief. Patients being treated with TMS do not require anesthesia or sedation. They remain awake and alert and return to work or their daily routine immediately after each treatment.

The best way to determine if NeuroStar TMS is right for you is by speaking with your doctor or a referring psychiatrist.

In order to ensure your safety, the following general requirements will need to be met prior to receiving TMS therapy:

Benefits will be verified upon physician recommendation for treatment.

To refer/schedule a consultation please call the
TMS Coordinator Justin – 813.434.1981

(This is not a complete list of accepted insurances. Please call to have benefits verified)

TMS stands for transcranial magnetic stimulation. It is used to treat depression by stimulating the brain non-invasively using electromagnetic fields, similar to those produced by an MRI machine. During TMS Therapy, a magnetic field is administered in very short pulses to the part of the brain that research has demonstrated to be associated with depression. The typical initial course of treatment is about 19-37 minutes daily over 4-6 weeks.

It usually takes time for healthcare insurers to establish coverage policies for newly approved treatments such as NeuroStar TMS. However, many commercial and Medicare plans have recognized the effectiveness of treating depression with TMS Therapy and now cover TMS as part of their plans. See here for a full list of insurance plans that cover TMS.

NeuroStar® is non-systemic (does not circulate in the blood throughout the body), so it does not have side effects such as weight gain, sexual dysfunction, nausea, dry mouth, sedation, etc. The most common side effects reported during clinical trials were headache and scalp discomfort – generally mild to moderate – occurring less frequently after the first week of treatment.

No, the two procedures are very different. While both are effective in the treatment of depression, there are many differences in safety and tolerability.

During TMS Therapy, patients sit in a chair and are awake and alert throughout the entire 19-37 minute procedure – no sedation is used with TMS Therapy. Patients can transport themselves to and from treatment.

In over 10,000 active treatments with the NeuroStar TMS Therapy system in clinical trials, no seizures were observed. TMS Therapy was also shown to have no negative effects on memory function in these studies.

In contrast, “shock therapy,” or electroconvulsive therapy (ECT), intentionally causes a seizure. Patients receiving ECT must be sedated with general anesthesia and paralyzed with muscle relaxants. Recovery from an ECT treatment session occurs slowly, and patients are usually closely monitored for minutes or a even few hours after a treatment.

Short-term confusion and memory loss are common with ECT, and long-term disruptions in memory have been shown to occur and may persist indefinitely in some people. Because of the side effects associated with ECT, a significant amount of caregiver support is required.

A typical course of TMS Therapy is 5 times per week for 19-37 minutes sessions, depending on what the doctor determines is the correct protocol, over 4-6 weeks.

Any additional treatments are based on clinical judgment.

In NeuroStar clinical trials, over 10,000 TMS treatments demonstrated its safety, with no occurrence of seizures. However, there is a small risk of a seizure occurring during treatment. This risk is no greater than what has been observed with oral antidepressant medications.

While NeuroStar TMS Therapy has been demonstrated to be effective, not all patients will benefit from it. Patients should be carefully monitored for worsening symptoms, signs or symptoms of suicidal behavior, and/or unusual behavior. Families and caregivers should also be aware of the need to observe patients and notify their treatment provider if symptoms worsen.

No, NeuroStar TMS Therapy uses the same type and strength of magnetic fields as MRIs (magnetic resonance imaging), which have been used in tens of millions of patients around the world and have not been shown to cause tumors. The magnetic energy used in a full course of TMS Therapy is a small fraction of just one brain scan with an MRI.

No, the most common side effect related to treatment was scalp discomfort during treatment sessions. This side effect was generally mild to moderate, and occurred less frequently after the first week of treatment.

If necessary, you can treat this discomfort with an over-the-counter analgesic. If these side effects persist, your doctor can temporarily reduce the strength of the magnetic field pulses being administered in order to make treatment more comfortable.

Less than 5% of patients treated with NeuroStar TMS Therapy discontinued treatment due to side effects.

NeuroStar TMS is the only TMS system with the durability of its effects established over 12 months. In a clinical trial, 2 out of 3 patients who had either responded to treatment or completely remitted their depression symptoms reported 12 months later that they remained at the level they were at the end of the trial. Additionally, after the trial, only 1 in 3 patients needed to return for ‘maintenance’ TMS sessions.

Yes. In clinical trials, NeuroStar TMS Therapy was safely administered with and without other antidepressant medications.

No, the NeuroStar TMS Therapy system is the first TMS device to be cleared by the U.S. Food and Drug Administration (FDA) for the treatment of major depression.

The NeuroStar TMS Therapy system is also the first TMS device to have been evaluated in a large, multicenter, controlled clinical trial, as well as the only TMS system with the durability of its effects over 12 months established.

Clinical trials have demonstrated the effectiveness of NeuroStar® TMS Therapy in treating patients who have not benefited from prior antidepressant medication. NeuroStar TMS Therapy was studied in adult patients suffering from Major Depressive Disorder, all of whom had not received satisfactory improvement with previous treatments.

An Effective and Durable Option for Treating Major Depressive Disorder

In an independent, randomized, controlled trial funded by the National Institute of Mental Health, 307 patients were treated with the NeuroStar TMS System for 4 to 6 weeks, similar to real clinical context.1

Patients were divided into two groups: 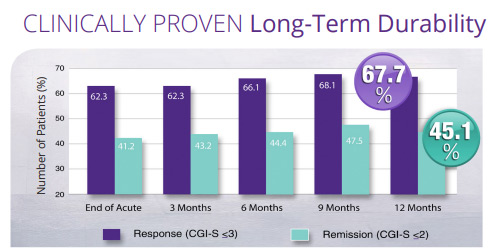 At the end of their treatments, patients who had received NeuroStar TMS Therapy were four times more likely to achieve remission compared to patients receiving a sham treatment. 1 in 2 patients experienced significant improvement in their depression symptoms and 1 in 3 experienced complete remission. Patients treated with the NeuroStar TMS System also experienced significant improvement in anxiety and physical symptoms (such as appetite changes, aches and pains, and lack of energy) associated with depression.1

NeuroStar TMS is the only TMS system with the durability of its effects established over 12 months.

In a trial with physician directed standard of care, meaning Neurostar TMS Therapy could be used in conjunction with antidepressants as needed, patients who had received treatment then reported their symptom levels at 3, 6, 9 and 12 months to determine the durability of their treatments. By the end of the 12-month period, 2 out of 3 patients who had either responded or completely remitted after TMS treatment remained at the symptom levels they reported at the end of the treatment phase.1

After the end of the treatment period, only 1 in 3 patients needed to come back for maintenance TMS sessions, or ‘reintroduction’ during this 12-month period.1

Additionally, Neuronetics has developed a new tool to use in educating patients on the best practices of treating depression. The Best Practices Treatment Guideline for Depression has been developed to help patients understand TMS Therapy as an option if their first line antidepressant medications stop working. This guideline is based on the 2010 American Psychiatric Association’s practice guidelines and NeuroStar TMS Therapy indication for use, which says:

NeuroStar TMS Therapy is indicated for the treatment of major depressive disorder in adult patients who have failed to achieve satisfactory improvement from prior antidepressant medication at or above the minimal effective dose and duration in the current episode.

Please see the Treatment Algorithm for an effective illustration of the use of NeuroStar TMS Therapy early on in the treatment of depression.

NeuroStar TMS Therapy has not been studied in patients who have not received prior antidepressant treatment.

TMS+YOU is an online community and national patient advocacy site for TMS Therapy. Those considering Transcranial Magnetic Stimulation can connect with patients who have had the treatment to answer questions, share insights, and get the latest information.

Clinical trials have demonstrated the safety of NeuroStar TMS Therapy® in treating patients who have had an inadequate response to prior antidepressant medications.

Treatment with NeuroStar TMS Therapy caused very few side effects and was generally well tolerated by patients. The most common side effect reported during clinical trials was scalp discomfort—generally mild to moderate and occurring less frequently after the first week of treatment.

Fewer than 5% of patients discontinued treatment with NeuroStar TMS Therapy due to adverse events.

Over 10,000 active treatments were performed across all NeuroStar® clinical trials demonstrating its safety1 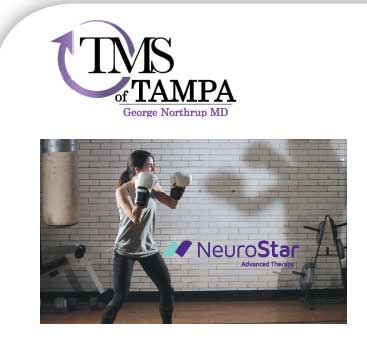 Use this helpful guide to identify and take notes on topics you’d like to learn more about at your first appointment.

Is TMS Right for You?

Dealing with your insurance provider is a hassle – let us handle that part. Fill out & send us the questionnaire below – we’ll do the rest !